Confession: I am a hardcore gamer. And better yet, I represent the shocking 45% of gamers that happen to be women. Think video games are simply a boys’ club? Think again.

Just like a tree house sign that reads “NO GIRLS ALLOWED,” women are made to feel invasive upon entering the “boys’ club” of playing video games.

Aside from playing dolls while decorating my Barbie dream house, as a young one I embraced my inner tomboy and found solace in the now-ancient video game console known as a “Nintendo Game Cube.” I spent hours playing numerous classics such as “Luigi’s Mansion,” “Mario Kart,” and the “Adventures of Zelda” collection.

Although my previous selection of video games is a bit outdated, gender roles in gaming still remains a hotly debated topic. Looking back, I was lead to believe that men play video games far more than do women. I remember accepting that “fact” without thinking twice. Now, we have numbers to prove that wrong.

While playing video games alongside my brother and his neighborhood friends, I never once saw myself as an inadequate adversary or opponent. I knew I was equally as intelligent, cunning, and receptive to deemed “gaming skills.” Upon selecting a player for the next round of “Super Smash Bros,” I chose the few female roles available, this usually being “Queen Peach” or “Zelda.” Little had I realized after emerging victorious in another brawl that the gender imbalance manifested in ways far beyond misrepresentation in the gaming system. 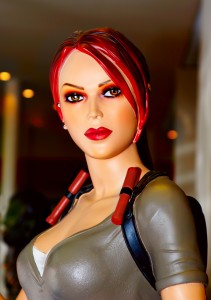 Although I could manage winning with select female characters, I sought more than merely a reward, but truly a role model within the world of my favorite game. To my dismay, I found no such heroine suitable to my present aspirations and abilities. Instead, I was forced to look upon sexually glorified objects of conquest and desire. For instance, the image of Lara Croft in the popular 1996 video game of “Tomb Raider,” with shorts that barely reach her waistline and breasts so greatly enlarged they could strike the enemy down with one blow.

Yet, there’s still hope. With the present “Call of Duty” hype, gamers have demanded more controllable female characters to fight alongside men on the battlefield. The latest enhancement to the gaming series was the addition of female character Tanya Pavelovna, and there’s been talk of more add-ons since. Even still, video game designers (the majority of which are men) are not too thrilled by the idea of females leading the next generation of video games. Aside from viewing female characters as lacking complexity, they further proclaim that men will simply not purchase games with a strong female lead.

What kind of message does this send the gaming community? In truth, it exhibits the male population of gamers as hyper masculine, desiring traditionally “macho” characters to feel empowered in a fictional setting. And again women are to be portrayed as secondary helpers. For instance, in “The Legend of Zelda: Ocarina of Time” video game, Navi is a fairy that often sends clues or messages to the male hero, Link.

As a female gamer, I am among the 46% of women that are video game purchasers as well as the 31% of women compared to boys under 17 that make up 19% of current gamers. Those of us that are addicts as well as lovers have always viewed the true potential of video games as extending far beyond the incentive of mindless entertainment. Yet, if video games remain controlled by those with a mindset decades in the past, one cannot help but feel fearful for the future.

So get ready gamers! The feminization of video games will undoubtedly yield more benefits than a rocking female protagonist to take the gaming world by storm. It will be a “game changer,” literally.