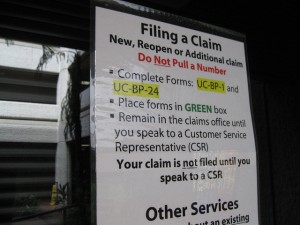 I think we all were heartened by the news in November that while 13 million Americans remain out of work, the overall unemployment rate decreased from 9.9 percent to 8.6 percent.  But we also learned that while the rate of unemployment improved, the duration of time out of work increased.  More workers stopped actively looking for work and dropped out of the labor force than gained jobs during the last month. In addition over 5.6 million Americans have been looking for work for six months or more. For women age 20 and over the average was 42.1 weeks. For women age 55 or over, it was 54.8 weeks.

The measure of who we are is what we do about these numbers that are in fact real people with real families to support. As a nation we have provided long-term jobless workers federal emergency unemployment insurance benefits, which supplement state unemployment insurance, which generally lasts only 26 weeks or less. In previous recessions, Congress always extended these benefits whenever unemployment reached higher than 7.2 percent.  But even though unemployment is expected to remain above 8.0 percent through 2012, Congress continues to bicker about extending these programs even though they will expire at the end of December leaving these real people with no money for food and other essentials. Quite a Christmas present.

If Congress doesn’t act by December 31, nearly 2 million people will lose their benefits in January alone. Millions more will lose this critical lifeline in the near future – over 6 million during 2012 if Congress continues to ignore the plight of their fellow Americans.

We also need to remember that unemployment insurance isn’t just essential for families struggling to make ends meet; it is also good for our economy. The long term unemployed are not in a position to save or invest their unemployment dollars; they need to spend them right away on food, clothing, rent, mortgages, transportation and the like. Studies done by the Urban Institute and others have show that every dollar spent on employment insurance stimulates 2 dollars in growth in the U.S. economy. Since Congress claims that jobs are high on their agenda, they need to recognize that not extending unemployment insurance will take dollars out of our already fragile economy and result in even larger future job losses.

So for both compassionate and pragmatic reasons, I urge Congress to step up and do its job.

Cross-posted with the Business and Professional Women’s Foundation Blog