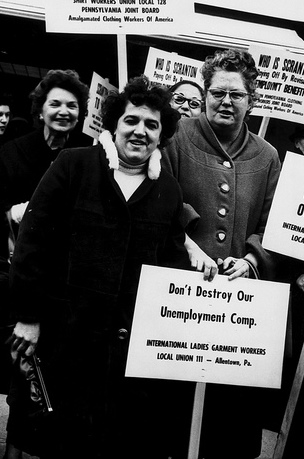 Americans for Democratic Action (ADA) was founded in 1947 by Eleanor Roosevelt and other liberal luminaries in order to protect the legacy of her husband, the recently-deceased President Franklin Roosevelt, a legacy that included unemployment insurance (UI).  That legacy was under attack by a rabidly conservative Republican Congressional majority recently swept into power by a wave election.  Sound familiar?  The point is that the struggle today is not a new battle, just a new stage in an ongoing one, one on which ADA has a unique historical perspective.

National UI was belatedly (compared to other industrialized countries) instituted in the United States in the 1930s as part of the New Deal.  The Government put out a booklet to defend and explain the system; several sections of the booklet are introduced by quotes from labor experts on the need for unemployment insurance:

For the past 4 years the American people have witnessed a tragic demonstration of the breakdown of our older methods of dealing with men and women who are out of work through no fault of their own. The fundamental case for unemployment protection lies in the fact that under a democratic form of society we are forced to prevent any large scale starvation. Funds must be provided somehow…– Stanley King in American Labor Legislation Review, December 1933

Yes, preventing large-scale starvation would seem to be right up there on any to-do list for decent, democratic societies– then and now.  Another Depression-era author pointed out that even if the government shirked its duty to provide direct assistance to the unemployed, society would still bear the cost of the plague of joblessness.

The cost of security for millions of workmen is not only very small. It is not a new cost. Like the price of many other things, we are paying it now without knowing it. It is not an additional cost of doing the business of the Nation; it is partial recognition that the real responsibility for unemployment is not personal but social. Somebody is paying right now for unemployment and must continue to pay.–C. A. Kulp in American Labor Legislation Review, March 1934

Avert your eyes from the latest unemployment statistics; shut your ears to stories of 500 people applying for a single job opening; go hide in your gated community.  Unemployment– especially uncompensated, impoverishing unemployment– will still take its toll:  in a lingering, painful recession; falling tax revenue, family break-ups, foreclosures, crime.  So helping the unemployed keepbody and soul together is not only the right thing to do, it’s the smart thing.  Before breaking for Thanksgiving, Congress must extend emergency unemployment insurance for at least a year.

The need to sustain the families and communities of our nation during this prolonged economic downturn is obvious to most of us. Such duties have always been with us; but the struggle to do so now, in the present, in November 2010, calls upon all of us to do our part.  Otherwise we risk a cold and sorrowful holiday season – not just for the unemployed, but for us all.