The 57th Annual Grammy Awards set a new precedent last night with a speech from a domestic violence survivor and activist and the airing of a PSA from President Obama about violence against women. 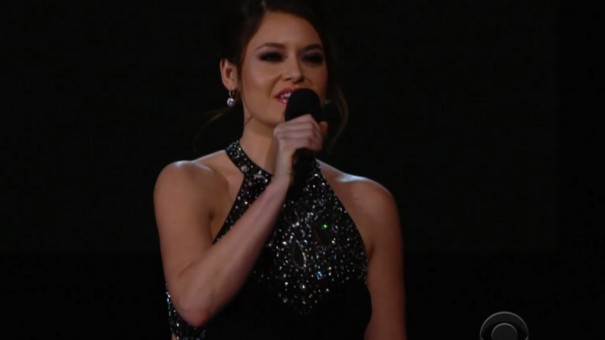 Party way through the awards ceremony last night, President Obama appeared on a video screen. “We can change our culture for the better by ending violence against women and girls,” he said. He quoted the statistic that 1 in 4 women have experienced some form of domestic violence, encouraging artists and viewers to sign the It’s On Us pledge to take action against sexual assault.

Emboldening the Grammy’s push against domestic violence was Brooke Axtell, who introduced singer Katy Perry with her powerful story of surviving abuse and assault. Axtell spoke of her violent relationship with an ex-boyfriend during which she “believed my compassion could restore him and our relationship.” Axtell said she only sought help after her boyfriend threatened to kill her, after which her mother encouraged her to reach out to a local domestic violence shelter. “This conversation saved my life,” Axtell said.

Her speech, which has gone viral across social media, urged survivors to “reach out for help.”

Authentic love does not devalue another human being. Authentic love does not silence, shame or abuse. If you are in a relationship with someone who does not honor and respect you, I want you to know that you are worthy of love. Please reach out for help. Your voice will save you. Let it extend into the night, let it part the darkness. Let it set you free to know who you truly are — valuable, beautiful, loved.

This is the second time in a week that domestic violence has been in the national spotlight. Last weekend Ultra Violet sponsored a Super Bowl advertisement saying “Let’s take domestic violence out of football” and using the hashtag #GoodellMustGo. The commercial noted that 55 domestic violence cases in the NFL have gone unanswered while under the leadership of league commissioner Robert Goodell.