This weekend I was in Ferguson, Missouri. 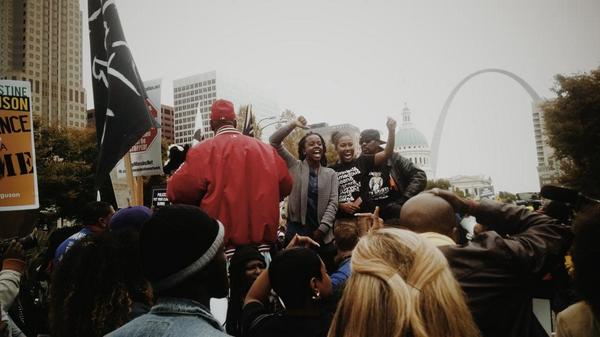 You may have even heard me in your car, talking to St. Louis Public Radio about why I, too, converged on the city for the Ferguson October Weekend of Resistance; why it’s so important – across race, ethnicity, zip code, language, age, or physical ability – to connect the dots that form the picture of our shared struggle.

This weekend was a heady experience, but it was also extremely sobering. I watched a St. Louis County officer in full riot gear idly swing his baton the first night I spent in Ferguson. An overhead helicopter thoroughly surveilled our march, blinding protesters even after we’d dispersed. No longer had we gotten back to our host’s home before police sealed off the block, checking IDs, permitting no one entry or escape. But I wasn’t looking for proof of young people’s right to rage in Ferguson. I didn’t need to join a 26-hour carpool to find evidence of a police state in the US. (We’ve had them in my city, too.)

This weekend was about anchoring a movement, and there are three very distinct moments set on a loop in my mind. For me, they characterize just a few of the ways this fight is different. Like many said this weekend: Ferguson October is our generation’s Freedom Summer, and the symbols and character of this movement are uniquely and distinctly ours to claim.

Something you may not catch in your live-stream viewing of events in Ferguson is the persistent appearance of upside down US flags. It’s not a mistake. Throughout the weekend, in fact, I spent a great amount of time reveling in just how simple and powerful that symbol is.

In her book, Sister Citizen: Shame, Stereotypes, and Black Women in America, Melissa Harris-Perry retells the story of Parnell Herbert. Herbert is a New Orleans, Louisiana native and a survivor of Hurricane Katrina. During the wholesale horror of the storm’s aftermath, Herbert marveled at the number of African Americans who had large US flags in their homes. Herbert asked, “Why did the survivors begging for help from the US military forces feel it necessary to wave the American flag, as opposed to a white sheet or blood stained towels?”

In the book, Melissa Harris-Perry discusses how the waving of the flag functioned as a “specific claim of citizenship and belonging” on the part of black Americans who were wholly and rhetorically dispossessed by the mainstream media as “refugees.” Never mind the history of black people in this country – in that moment, we were refugees.

People of color were further disowned then degraded, renamed “looters” and “rapists,” setting off a pattern of character-assassination by so-called official sources and agencies of authority – behavior that, by now, is all too familiar to the family of Michael Brown, and countless other families who’ve lost loved ones to state aggression.

But if the use of the flag during Hurricane Katrina represented a plea for recognition as fellow Americans and citizens, so ordained by the bloodshed and legacy of American slavery, then this flag – the Ferguson October flag – is something much different. I understand this flag to be a moment of clarity. I identify this as a remix. This is young people of color recognizing that even if the state never respects our humanity, the state can never render us extinct. And yes, I said “extinct.”

So many allies, despite their good intentions, fall short of embracing all the evidence. While pointed critiques of the numbers have emerged, the Poynter Institute fact-checked black homicide per “legal intervention.” According to Poynter, “A 2002 study in the American Journal of Public Health found that the death rate due to legal intervention was more than three times higher for blacks than for whites in the period from 1988 to 1997.” Given the lack of more recent data, it’s no wonder the Malcolm X Grassroots Movement attempted to update the numbers.

Dred Scott Way and The “Fountain Filled with Blood”

“This space is a moment in a continuum! This moment was consecrated in blood!”

This is what Montague Simmons, the head of the Organization for Black Struggle, shouted down to the crowd. Saturday morning, on the way to Kiener Plaza, we marched down Dred Scott Way, onto Chestnut Street, and past a red-dyed fountain, located just steps away from the Old St. Louis Courthouse where the case of Dred Scott was heard.

In April 1846, Dred Scott and his wife filed suit for their freedom having lived in free territory for nearly a decade, but as the “property” of slaveholders. The case was ultimately decided by the US Supreme Court in 1857. In a 7-2 split, the majority ruled that “neither the class of persons who had been imported as slaves nor their descendants, whether they had become free or not, were then acknowledged as a part of the people nor intended to be included.” If it still wasn’t clear, Justice Roger B. Taney made it crystal: “But it is too clear for dispute that the enslaved African race were not intended to be included and formed no part of the people who framed and adopted this Declaration.” (emphasis added)

Bottom line: Free territory or not, Dred Scott and his wife were property. Subhuman. Inferior. Yet, despite the more than 150 years separating our generation from his, no amount of time or distance could erase that legacy from the courthouse backdrop of our gathering. “This space is a moment in a continuum!” Simmons said it for Dred Scott. “This moment was consecrated in blood!” Simmons said that for us.

The red fountain behind us was supposed to signify the St. Louis Cardinals’ playoff-run. Instead, it struck an incredibly dissonant chord with our reason for gathering. That fountain, Dred Scott, Mike Brown, special-edition Darren Wilson playoff jerseys, Vonderrit Myers, Kajieme Powell, and the notion of legal lynching all breached their respective silos, adding to the sense that while some communities grieve, others are permitted to continue with business as usual – maybe even “inside baseball” as usual. While young activists are jailed for demanding justice of their body politic, Darren Wilson, the officer who killed an unarmed teen, continues to walk free. Yet, we’re the only ones asking: how can this be?

A Mirror, Tears & A Raised Fist

Friday night, to symbolize all the lives lost to police brutality, a group of young men carried a mirrored casket to a line of waiting officers at the Ferguson Police Department. At the front of the crowd, an elder shouted at the restless officers, “This is what you have wrought!” He pointed at the shimmering casket. “We bring you this coffin to show you your reflection in the death and the suffering and anguish and pain and grief of our community,” he said. “Look into the mirror,” he shouted. “We are human too. You are not the only people who get to be human.” At that moment, the first line of officers in uniform disappeared. A second line of officers in full riot gear took their place. Apparently, that’s the kind of response this elder’s impassioned plea elicited.

The next night, Lesley McSpadden, the mother of Michael Brown joined our march back to the Ferguson Police Department. Her presence certainly seemed to de-escalate officers’ response, but before we started the trip, the family paused to express their thanks for the continued outpour of support. Someone called out, “We got your back, Lesley!” To which, a worn out Lesley McSpadden silently raised a clenched fist and smiled.

I would have understood if she decided not to march that night. The loud chants upon her arrival, “We are Mike Brown!” could have been too much to bear. For the family of Vonderrit Myers, there is still a long road to a triumphant fist. Myers’ family grieved freely before the crowd, sharing in their fresh loss. Like Lesley McSpadden, Syreeta Myers’ son was 18 at the time of his death. He was “no stranger” to police. In fact – as if to corroborate his guilt, perhaps even justify the reason he was shot at 17 times – it’s widely reported that Myers was wearing an ankle bracelet when he was killed.

While Lesley McSpadden’s grief will never fully be extinguished by this moment, Syreeta Myers’ has already seen people attempt to nullify her sorrow, reminding her that her son was “no angel.” It’s worth it to unpack how Vonderrit arrived here, but to even engage in that conversation feels like the work of an apologist. This is why it’s so incredibly important that Ferguson protested for Vonderrit Myers, too.

Today, Rebecca Rivas at the St. Louis American live-tweeted a press conference held to address the police-involved shooting death of Vonderrit Myers. The attorney for the shooting officer, Brian Millikan commented that his client, who was off duty at the time of the shooting, “did not initially see a gun. He saw Myers holding his waistband. He was obligated to take action.” Rivas tweeted, “Asked if police chase after every man who has his hands on his pants, they said they know the difference of men pulling up pants and holding gun.”

That’s why respectability politics have no place in this movement. Where the civil rights movement needed the perfect victim, this movement will fight for your right to exist, period. Vonderrit Myers was human, too. That is enough.

This weekend was incredible, but it was bigger than a simple protest. What we’re witnessing is the beginning of a movement that isn’t borrowed from yesteryear, or manifesting in a vacuum. The terms of this movement are being defined by this generation in a way that could only come from this generation. These symbols are not definitive markers endorsed by the people doing the work, but they are a testament to the spirit of Ferguson October. I’m so sorry we have to unite under such grave circumstances, but I’m so nourished by what I just experienced.

People from every imaginable background are coming together to challenge oppression because of a simple premise: We are human, too.