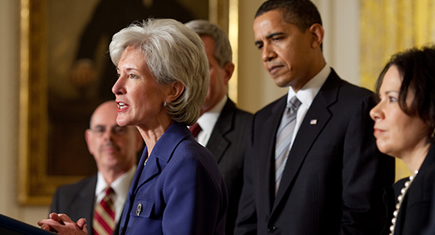 This afternoon, US Department of Health & Human Services (HHS) Secretary Kathleen Sebelius and the Obama administration released their decision not to broaden the exemption for birth control without copay. In August, HHS ruled that a host of women’s preventive health care services – including all FDA approved contraceptive methods – will be covered under all health insurance plans without copay or deductible as part of the Affordable Care Act. Today, feminists and women’s health advocates across the country can celebrate to know that millions of women will gain full coverage in the very near future.

For most companies and organizations, coverage for women’s preventive care will begin August of this year (or whenever your plan renews after that). Under the rules released by HHS today, the only exception for this rule will be “houses of worship” – so, basically, churches, synagogues, mosques, etc. and their employees. They will not at any point be required to offer this coverage. Today’s big win ensures that religiously affiliated institutions, companies and non-profits such as universities, hospitals, etc. will be required to cover contraceptives for their employees, students and members. They will however have one extra year to implement this coverage in their insurance plans.

Attempts from religious organizations – mainly the National Conference of Catholic Bishops – to put pressure on Secretary Sebelius and the Obama administration to broaden the exemption to all religious organizations came in November. Luckily, we now know today that the Affordable Care Act will live up to its promise of ensuring medical insurance coverage for Americans based on sound science and the needs of people and families – regardless of sex, socio-economic status, race, or medical history.

Read more on how women benefit from the Affordable Care Act:

Today, May 5, 2011 is International Day of the Midwife, which was spearheaded by the International Confederation of Midwives in 1992.

It’s been said over and over, but it bears repeating. ONE WOMAN DIES EVERY MINUTE OF EVERY DAY DUE TO COMPLICATIONS OF CHILDBIRTH. That’s approximately 529,000 women each year, with another 10 MILLION more suffering from maternal injuries, infections or disease.

This is not a new and evolving disease that we have been struggling to find a cure for decades or centuries. It’s childbirth. Women have been doing this as long as there have been women, which – just a little reminder – is about 200,000 years. Nearly 99% of maternal deaths occur in the “Global South,” which accounts for 85% of the world’s population. However, I would be remiss not to point out that the United States has a relatively appalling maternal mortality rate: 1 in 4,800 births, placing us 41st in the world.

As an aspiring midwife, I have a lot of conversations with people who don’t understand what midwives are or what they do.  In the United States, where the role of midwives has largely been medicalized within the nursing model of care, I will most likely receive my second bachelor’s degree in nursing, and then complete a master’s program in nurse midwifery. Yet, across the world midwives are often community members who have received the training to safely deliver a child.

What is needed to intervene and prevent thousands of women from dying each year from childbirth is shockingly simple – a skilled birth attendant and a safe birthing kit. In fact safe birthing kits used by NGOs around the world are estimated to cost approximately $8 each and include a bar of soap, a pair of gloves, a sheet of plastic, clean cotton string, a razor blade, and a blanket. According to the Feminist Majority Foundation, it costs approximately $3000 to train a midwife in Afghanistan, which has one of the worst maternal mortality rates, approximately 1 in 8 births.

Skilled birth attendants, such as midwives, are essential to ensuring a clean and safe birthing environment, which can help prevent infection for both mother and child. They are trained to recognize and treat common complications such as eclampsia, obstructed labor, fistula, and hemorrhaging. In addition to this, midwives are often a public health ambassador in their communities, speaking about the importance of things like hand washing and nutrition.

In a statement regarding International Day of the Midwife, the UN Population Fund (UNFPA) Executive Director Dr. Babatunde Osotimehin said it best: “Midwives deliver – and not only babies. They save lives and promote good health in societies as a whole. They are an essential workforce in an effective healthcare system.”