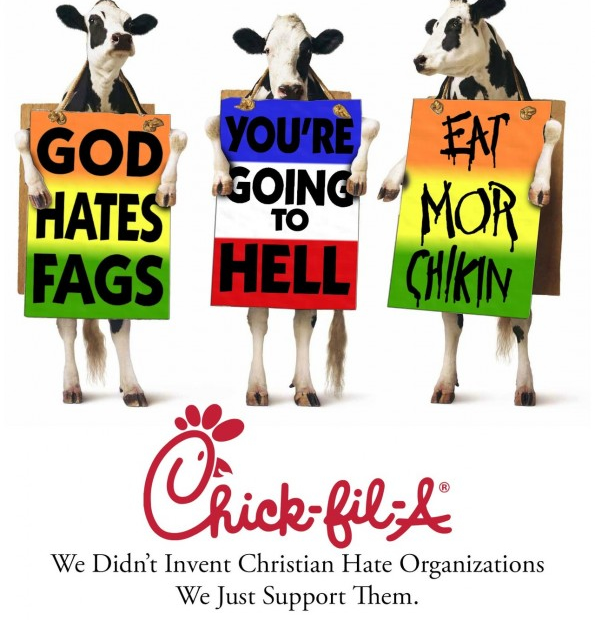 In a follow up interview Cathy went on to say:

“I think we are inviting God’s judgment on our nation when we shake our fist at Him and say, ‘We know better than you as to what constitutes a marriage. I pray God’s mercy on our generation that has such a prideful, arrogant attitude to think that we have the audacity to define what marriage is about.

We need to be more faithful to depend on a God who does love us and wants to have a relationship with us, and wants to give us the desires of our hearts … We intend to stay the course. We know that it might not be popular with everyone, but thank the Lord, we live in a country where we can share our values and operate on biblical principles.”

LGBTQ folks and their allies have been extremely active and vocal in the wake of Cathy’s comments, primarily because this isn’t just the case of a homophobic man spewing hate speech to anyone who will listen. This is a case of a homophobic corporation feeding millions of dollars into organizations that actively participate in fighting gay-rights efforts. According to Equality Matters, Chick-Fil-A has donated to:

In response to the backlash against Chick-Fil-A, the National Organization for Marriage and Governor Mike Huckabee have declared today, August 1st, National Eat Chick-Fil-A Day. Their hope is that legions of people will flock to these stores to eat chicken and stand in solidarity against all the scary angry homos and their homo-loving friends.

But it doesn’t stop there! It should surprise absolutely no one that the Colorado Personhood Coalition is also jumping on the Chick-Fil-A band wagon on this fine day, in a last ditch effort to gather the signatures they need to get “personhood” on the ballot before August 6th.  Personhood amendments are extreme anti-abortion amendments that seek to grant full “personhood” rights to human embryos–fertilized eggs. These amendments are so severe that they would outlaw all abortions even in cases of rape, incest, or to save the life of the women. They may also outlaw certain forms of birth control, IUDs, in vitro fertilization, and treatment for some women with cancer or other serious illness. It could even lead to the criminalization of miscarriages. 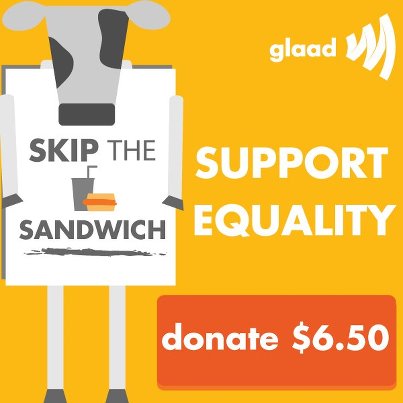 I’m sure the Colorado Personhood Coalition sees “Chick-Fil-A Day” as the perfect opportunity to capitalize on all this controversy and further their own cause. The reality is that Colorado has already rejected personhood twice. In fact, no state has passed a personhood measure. They  just keep trying though! This means we must remain vigilant about educating people on what personhood amendments are and mobilizing against them whenever and wherever they pop up across the country.

Of course, homophobes aren’t the only ones organizing these days. If you support and advocate for the full equality of all humans, there are plenty of things you can do this week too! For example, you might want to take your favorite same-sex partner down to the nearest Chick-Fil-A this Friday for National Same Sex Kiss Day! You could also donate or encourage your formerly Chick-Fil-A sandwich loving friends to donate the average cost of a Chick-Fil-A meal ($6.50) to Gay & Lesbian Alliance Against Defamation (GLAAD).

The Human Rights Campaign is organizing a Twitter campaign to raise awareness about Chick-Fil-A’s discriminatory policies. Make use of this handy hashtag if you’re a tweeter: #ChickfilHATE.

At a time when gay rights are gaining more and more public support, it is clear that Chick-Fil- A is on the wrong side of history.  As consumers and activists we should remember to use our buying-power as a resource.  By boycotting Chick-Fil-A and speaking out against them, we are making it clear to them and other businesses that their hateful actions will not be tolerated.