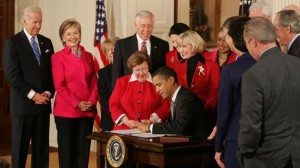 In time for Mothers Day, the 12th HERvotes blog carnival is dedicated to getting the word out about economic security for women, especially in their retirement years.  Women need better benefits — not cuts — under social safety net programs.

The economic slump in both the U.S. and Europe has prompted elites to call for “austerity.”  But we know that’s just a code word for cutting social programs women rely on disproportionately.  It turns out, though, that politicians who champion “austerity” will pay a price at the polls.  Just look at Europe: Last week, French voters ousted Nicolas Sarkozy and Greek voters threw the government into crisis — mainly in reaction to harsh cuts in social programs and (in France) an increase in the official retirement age.  Voters get it: austerity leads to a stagnant economy.

Here in the U.S., austerity imposed by state and local governments has thrown hundreds of thousands of government employees out of work, the majority of whom are women.  Want to know why the unemployment rate, while declining, hasn’t gone below 8 percent yet?  It’s mostly because of spending cuts imposed by conservative state officials like Texas Governor Rick Perry, Indiana Governor Mitch Daniels, Florida Governor Rick Scott, Wisconsin Governor Scott Walker, Pennsylvania Governor Tom Corbett and others.

Despite elites’ call for across-the-board federal budget cuts and reductions in Social Security benefits, women’s organizations are calling for improvements in those benefits — specifically, child care credits for those who drop out of the work force to care for children or ill or disabled family members; an improved minimum benefit for lifetime low-wage and part-time workers, who are disproportionately women; fairer rules for disabled widows and surviving spouses, benefit equality for working widows; and equal benefits for same-sex spouses and partners, among other improvements.

In a report to be released today (Friday, May 11), the National Organization for Women Foundation, with the Institute for Women’s Policy Research and the National Committee to Preserve Social Security and Medicare call for these improvements to be made. In “Breaking the Social Security Glass Ceiling: A Proposal to Modernize Women’s Benefits” (PDF) we call for updating the program to face the new demographic reality: many women are now both bread-winners and primary care-givers and our guaranteed social insurance system should recognize that fact.

My Time, Intellect, Skills and Labor are Worth Less than Those of My Male Peers? Really? Yes, Really.– Anny Bolgiano, Intern, Coalition of Labor Union Women

Thank You, Mom, for Teaching Me to Be Safe and Secure– Malore Dusenbery, Special Populations Associate, WOW

#HERvotes, a multi-organization campaign launched in August 2011, advocates women using our voices and votes to stop the attacks on the major advances of the women’s movement, many of which are at risk in the next election.