This post is part of the #Hervotes Blog Carnival and was originally posted on the Feminist Campus Blog. 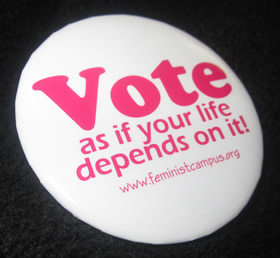 The Feminist Majority Foundation and Ms. Magazine are partnering with other organizations that represent women and people of color in a Health and Economic Right or HERvotes initiative for the election in 2012. FMF’s Campus Team is gearing up together with HERvotes for its Get Out Her Vote (GOHV) 2012 this coming school year.

Over 30 state legislatures introduced legislation, with 11 states enacting, Voter ID laws that will serve to disenfranchise votes by requiring voters to present a government-issued photo ID, such as a driver’s license, on Election Day.

You may ask yourself, “What’s the problem with requiring a photo ID on Election Day?”

The millions of students, who attend college out of their parent’s home state, will have problems casting a ballot in the states that do not recognize college campus IDs because they often do not include an address or are not government-issued.

According to the 1979 Supreme Court ruling in Symm v. United States, students have the right to vote where they attend school.

Students can obtain a government-issued ID at their local DMV that is not a driver’s license, but it presents an extra step that students have to take to register to vote and/or to vote and extra problems in conducting student registration and voting drives. Plus, students may not know about these new requirements before it is too late.

There are also more young women in college than young men, making the young women’s vote at greater risk of being disenfranchised.

According to the National Conference of State Legislatures, seven states including Georgia, Indiana, Kansas, Wisconsin, South Carolina, Tennessee, and Texas have passed strict voter photo ID laws. If a person showed up to the polls without a government-issued photo ID, she/he will be turned away from casting a ballot and given the option of voting a provisional ballot.

There are seven other states that require a photo ID when voting including Alabama, Florida, Hawaii, Idaho, Louisiana, Michigan, and South Dakota. However, in these states people can still vote if they meet other criteria, such as verifying a birth date or signing a form swearing his/her identity.

Several organizations including the American Civil Liberties Union (ACLU) and Project Vote are suing states with strict Voter ID laws under the Voting Rights Act. They may have success in some of these states, but lawsuits may not happen in time for the 2012 election.

There are several other election laws in states across the country that could have an impact on the voting process and voter registration drives. Florida for example, has reduced the number of days third party groups can submit voter registration forms from two weeks to 48 hours, and a $50 fine for each late application submitted. Third party groups, such as the League of Women Voters, felt that the risk is too high and have decided not to register as a third party organization for the 2012 election cycle.

So much is at stake in 2012! Voting rights, social security for young and old people, the Equal Pay Act of 1963, Title X or the National Family Planning Program, Medicare, Medicaid, Title IX of the Education Amendments, Roe v. Wade, Violence Against Women Act, and the historical Affordable Care Act.

With women representing the majority of the population and the black youth vote leading the people of color youth vote in 2008, we must start mobilizing now! Our future and livelihoods depend on it!

If you are interested to learn more about taking a GOHV voter registration drive to your campus this coming fall and spring, please contact your campus organizer.