So much SCOTUS, so little time. Here’s our take on two of the high court’s decisions from Monday.

By Lucy and Grace. 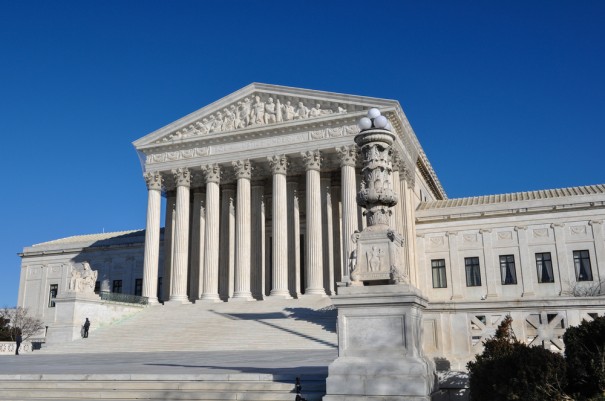 The Fisher v. University of Texas Supreme Court case reviewed the affirmative action plan of one public university – but its effects are far reaching.

When Abigail Fisher was denied admission to University of Texas – her top choice school – in 2008, she filed the lawsuit. The University of Texas, as well as other public colleges and universities in Texas, are known for their “Top Ten” plans, which allow “automatic admission to eligible students in the top 10% of their high school class.” In addition, they consider students “under standards that take account of academic achievement and other factors, including race and ethnicity.” Since Fisher was not admitted, she believes her race played a factor. Fisher is white. A 7-1 Supreme Court ruling in her case sent the case “back to the lower courts for further review.” By refusing to issue a formal decision, the Supreme Court sidestepped the major question: what do we do about affirmative action, and what does the future of the program look like?

In order to have a great job later in life, it’s important to receive an education. Huge racial discrepancies exist, however, throughout public school systems across America. In 2006, the Oprah Winfrey Show revealed vast differences between the academic experiences of students from Harper High School, a primarily African American high school located in a low-income area of Chicago, and Neuqua Valley High School in suburban Naperville, Illinois. Harper students visiting the Neuqua campus were stunned to see “an Olympic-size swimming pool, a gym and fitness center, an award winning music department, a huge computer lab, and a rigorous course curriculum” in place; when visiting classes, they struggled to keep up.

Harper graduates 40 percent of its students and Neuqua graduates 99 percent. There’s even a striking difference in state exam scores: only 16 percent of students at Harper meet reading standards, while 78 meet standards at Neuqua. When applying to a university without affirmative action, even some of Harper’s top scholars would have trouble gaining admission competing with a Neuqua Valley student. That isn’t fair. That’s important proof of why affirmative action programs exist and how they still serve students of diverse racial backgrounds.

Someday we may not need affirmative action. But in a world, and more specifically, a country, where racial discrimination still thrives, that’s not the case.

The decision in Vance v. Ball State University is highly contingent on precedents previously established by the courts in past years. It all started in 1998, when two cases established the guidelines for liability in terms of employment discrimination and harassment. In both, the courts held that if a victim suffered harassment by a supervisor, the employer was liable. However, the court ruled in the same year that if the victim was harassed by a fellow co-worker, the employer would not be liable unless the victim can prove the negligence of a supervisor to address the issue. This all pertains to the court’s interpretations of Title VII of the 1964 Civil Rights Act and its protections of victims of discrimination.

Since the 1990’s, these decisions have left the specific definition of an employee’s “supervisor” as something to be decided on a case by case basis. Now, fast-forward to 2013: Vance, an African American employee at Ball State University and alleged victim of racially-fueled employment discrimination, challenged the definition and argued that any person that “has authority to control someone else’s daily activities and evaluate performance” is defined as a supervisor. Her employer, however, charged that someone must have “the ability to take a tangible action such as hiring, firing, or promoting [an] employee” in order to be defined as such. The Supreme Court’s 5-4 decision sided with Vance’s employer. Justice Alito defined a victim’s “supervisor” as only the employee who has the ability to cause “significant change in employment status, such as hiring, firing, failing to promote, reassignment with significantly different responsibilities, or a decision causing a significant change in benefits.” Because her immediate supervisor at Ball State University did not meet this description, Vance’s employer won the case, avoiding discrimination liability under Title VII. The dissenting opinions of Justices Ginsburg, Breyer, Sotomayor, and Kagan all acknowledged the detrimental effects this harsh decision will have on the intent of Title VII.

Because this decision so narrowly defines the role of supervisor in cases of employment harassment and discrimination, it has severely limited the legal authority of victims to bring lawsuits against discriminatory employers with any hope of protection under Title VII of the Civil Rights Act. Unless an employee’s direct supervisor is also the person responsible for their payroll, hiring, firing, etc., that employee has a slim chance of combating any case of discrimination or harassment. Taking into account the realities of many offices and workplaces and the often convoluted nature of supervisory roles – not to mention that women disproportionately experience workplace harassment- it is easy to see how the court’s new definition of “supervisor” is a blow to the rights of workers.